An overview on early harp and lyre types from the Near East, Egypt, Greece; considerations on playing techniques and tuning with practical examples mainly on Greek instruments. 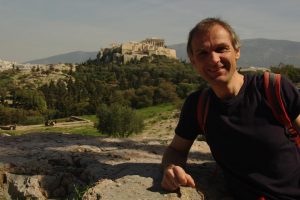 Stefan Hagel works as senior researcher at the Institute for the Study of Ancient Culture of the Aus­trian Acad­emy of Sciences. Starting from an analysis of melody patterns in Greek epic verse he specialized in ancient music, with publications on ancient music theory and its relation with musical practice, on musical instruments with focus on lyres and double pipes, and on questions of metre and rhythm. His work involves reconstruction of instruments and playing techniques, which have frequently been demonstrated to an international public in form of lecture-concerts. Characteristic for Hagel’s research is an extensive application of computer techniques and mathematical methods; he also created the Classical Text Editor, now the most widely used specialized word processor for critical editions. Currently Hagel runs an ERC-funded project on Ancient Music Beyond Hellenisation.

1:15 – 2:15 – My experience with the Kugo and the Japanese ancient music ensemble (Dr. Masumi Nagasawa)

The Kugo is an angular harp with silk strings. When Japan was at the end of the silk road, various types of arts and music entered Japan from many Asian nations around the 8th century. The treasures and the instruments arrived from abroad was kept in Shoso-in, a treasure repository in Nara for over 1200 years. Amongst them were the broken fragments of the Kugo. Masumi’s instrument is one of the few replicas made. She has performed numerous times with the Gagaku players, Japanese court musicians around the world. 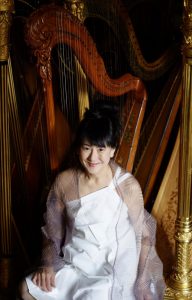 Masumi Nagasawa is an experienced and accomplished internationally known harpist. She received her PhD degree from the University of Leeds, England in 2018 on “Single-action pedal harp and their implications for the performing practice of its repertoire from 1760 to 1830”. She gives master classes in conservatories and universities all over the world. Currently, she teaches both double and single-action pedal harp at the University of Music in Detmold, Germany.

Masumi is a very versatile harpist and has made numerous recordings, released on labels such as Toshiba EMI Japan, Etcetera, Channel Classics, Globe, Ars and recently by BIS. Besides her classic harp activities, she has been performing the Kugo, a Japanese harp with the ancient music ensemble from Japan around the world.

Adungu is a term used to refer to one of the musical bow harps found and used in the East African country of Uganda. Classified as a chordophone, the adungu is basically assembled using a bowed branch of a tree to which 9 strings are attached. Its resonating chamber is normally a tree trunk that is hollowed and shaped like an iron box. Its sound table that covers the hollowed tree trunk is made using cow skins. Although the adungu is documented to have originally started in the northwestern cultures of Uganda, in the course of time, it seems to have been adopted and adapted by other cultures in different parts of Uganda as well.

For my virtual presentation, in addition to summarily discussing the cultures where this adungu bow harp is documented to have originated from, I will also summarily discuss the number of changes the adungu bow harp as a solo and ensemble instrument has gone through in the course of time. The changes will include among others, the tuning systems, the playing techniques, the construction, the musical and contextual functions of the recent past together with the current times. 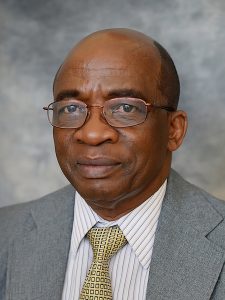 Dr. James K. Makubuya is an Associate Professor of Music at Wabash College, Crawfordsville, Indiana. He is by profession both a teacher and a performing musician. He received his B.A. in Music and English Literature from Makerere University, Uganda, his M.A. in Western Music at the Catholic Univ. of America, Washington D.C. and a Ph.D. in Ethnomusicology from the University of California Los Angeles, CA. Subsequent to his training with several folk master musicians from East Africa and West Africa, he is a proficient performer in several traditional African musical instruments that belong to a diverse range of folk cultures and ethnic groups.

With a disciplinary focus and fieldwork research in organology, his published articles have appeared in the Galpin Society Journal, Journal of African Music, Society for Ethnomusicology Journal, and the International Harp Journal. Some of his published CDs include The Uganda Tropical Beat, Taata Wange, Watik Watik: Music from Uganda, and Wu Man and Friends. As a skilled instrumentalist, he has performed music concerts at Carnegie Hall, New York City, NY., Museum of Making Music, Carlsbad, CA., Brooklyn Academy of Music, Brooklyn, NY., Santa Fe Chamber Music Festival, NM.,