An overview of the varieties of the earliest harps in Scotland, Ireland and Wales, from the early Middle Ages through to the 17thcentury. Differences in instrument construction, playing techniques and stringing materials will be discussed alongside live performances. 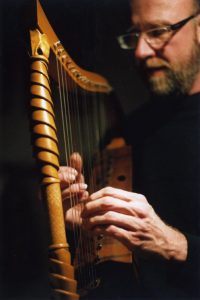 Bill Taylor is a specialist in the performance of ancient harp music from Ireland, Scotland and Wales, and is one of very few players investigating these repertoires on lyres, psalteries, medieval gut-strung harps, wire-strung clarsachs and Renaissance harps with bray pins. He is one of the foremost interpreters of music in the Robert ap Huw manuscript, containing the earliest harp music from Europe.

Bill performs and teaches in the Scottish Highlands and works with Ardival Harps in Strathpeffer. He performs and records as a soloist and with several ensembles, including Graindelavoix, Les Musiciens de Saint-Julien, Quadrivium and Sinfonye.

As a teacher he is much in demand, and is frequently invited to lead workshops in the UK, Europe and the USA, including regular appearances at the Edinburgh International Harp Festival.

A practical playing workshop on the use of historical damping techniques found in ancient Welsh and Irish sources. Suitable for application on both gut and wire strings, the techniques serve to provide rhythmic clarity and to focus the melodic line by eliminating extraneous ringing. Participants will learn pieces selected from early printed collections of Scottish and Irish music.

The harp has been present in England since at least the 10th century, and this lecture reveals the role, status, and symbolic significance of the harp during the medieval period in England. 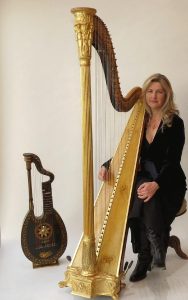 Sarah Deere-Jones is an Associate of the Royal Academy of Music in London where she graduated as a prize-winner in classical harp. Sarah started performing medieval music in the 1990s and her album of medieval music for harp ‘There is no Rose’ was voted a ‘Connoisseur’s Choice’ on UK radio station Classic FM. At this time she also started collecting iconography of the harp that originated across medieval England and which is commonly seen in medieval buildings and manuscripts.

She has now found over 250 examples to date, as well as countless references in written archives, and soon after this she started lecturing on the subject for the National Trust, English Heritage, the U3A and the Arts Society in UK and Australia, as well as providing workshops for harpists on medieval playing techniques and posture at harp festivals.

She has now researched and collated her data to reveal some fascinating patterns of the development of the instrument throughout this period, and a fresh new dimension on the instrument’s popularity, status, and playing techniques.