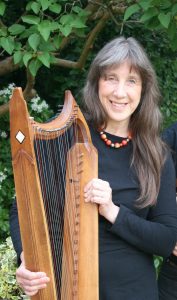 Nancy Thym’s programs, which combine harp music, songs, stories and dance, are warmly received all over the world. In her native California she studied theater, dance and anthropology and later folklore and ethnomusicology. For over 40 years she has lived in Germany where she transforms her extensive research on the history of the harp into programs which are both entertaining and educational – storytelling combined with songs and harp music, ballad programs on specific themes or one-woman theater pieces in which she portrays harpists of the past. Nancy is also recognized as the leading scholar on the history and playing technique of the Norwegian krogharpe. She leads workshops and performs regularly in Norway. 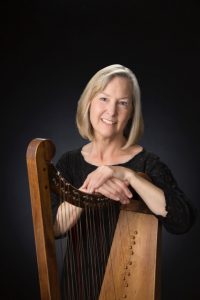 Maxine Eilander plays on a range of specialized Baroque and classical harps. She has most recently started working on a project of harp and violin music by little known female composers of the Classical and Romantic periods with violinist Tekla Cunningham. She is a regular harpist for Pacific MusicWorks in Seattle and with the Boston Early Music Festival.

She has appeared as a soloist with many leading ensembles including Tragicomedia and Tafelmusik. Maxine has performed at numerous opera houses and festivals including the Covent Garden Festival, Staatstheater Stuttgart and Netherlands Opera, playing continuo in productions of various baroque operas and chamber music. In 2012 Maxine was invited to perform Handel’s Harp Concerto at the World Harp Congress in Vancouver.

Recordings include Handel’s Harp, released on ATMA, with all of Handel’s obligato music written for the harp, including his famous harp concerto.

Stephen Stubbs, spent a thirty-year career in Europe. He returned to his native Seattle in 2006 as one of the world’s most respected lutenists, conductors, and Baroque opera specialists. In 2007, Stephen established his new production company, Pacific MusicWorks (PMW), based in Seattle, reflecting his lifelong interest in both early music and contemporary performance.

Stephen Stubbs is also the Boston Early Music Festival’s Artistic Co-Director along with his long-time colleague Paul O’Dette. Stephen and Paul are also the musical directors of all BEMF operas, recordings of which were nominated for six Grammy awards, including one Grammy win in 2015 for Stubbs’ conducting. His extensive discography as conductor and solo lutenist includes well over 100 CDs, many of which have received international acclaim and awards.

Jan Walters enjoys a varied career, having performed all over Europe, in Canada, Japan, Hong Kong, and the USA. She has been a featured soloist in both concerts and recordings with many of Europe’s leading period instrument ensembles including The Consort of Music, The Sixteen, and The Purcell Quartet. She has played at The Proms in The Royal Albert Hall, recorded the soundtrack for the Merchant Ivory film; Jefferson in Paris; on her Erard single-action pedal harp, and appeared with The Netherlands Opera as a continuo player. A Fulbright Senior Research scholar, Jan has uncovered music for the Italian Baroque triple harp and the single-action pedal harp in European music archives; some of which she has recorded for BBC Radio. Jan has appeared on both Radio and Television in the USA, Canada, and Europe. She has released five compact disc recordings under her own name on ASV Records’ Gaudeamus series including solo disc of music by Jean-Baptiste Krumpholtz on the single-action pedal harp. 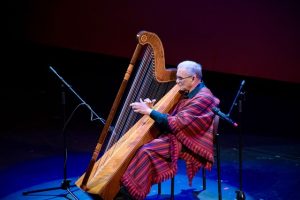 Alfredo Rolando Ortiz is internationally acclaimed by the critics, renowned soloist of the “arpa paraguaya” (Paraguayan harp), composer, author, educator and recording artist, With a multicultural repertoire that covers folk, classical and popular music from many countries, as well as his original compositions, Alfredo has performed for audiences of all ages and backgrounds. He has recorded many albums and is the winner of a GOLD RECORD in South America. He has lectured on a variety of subjects at universities, colleges, harp conventions and harp festivals, appearing many times at The American Harp Society Conferences, Somerset Folk Harp Festival, and the World Harp Congress. He is the author of several harp music books and articles and his compositions have been performed and recorded by pedal, lever and folk harpists around the world.  Besides a medical degree, Dr. Ortiz’s background includes studies and work in the fields of Music Therapy and Sensory Motor Learning in South America and at California State University-Long Beach and UCLA. He is the author of the book “Latin American Harps History, Music and Techniques,” the first book ever written about Latin American Harps. .